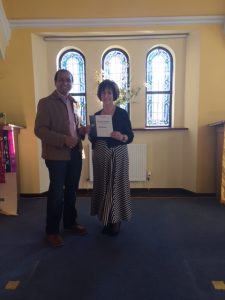 Gill Ornstein president of HOD speakers won both contests with a powerful speech and challenging evaluation. To add a feather in the cap for HOD, Mike Freedman was placed 2nd in the evaluation contest. 1st & 2nd go through to the division finals meaning that both Gill and Mike will be representing HOD and area 61 in the division L final at London Business School on Saturday April 8 at 1.30pm.

The division finals see some of the very beat speakers around London competing against each other and is an event not to be missed. Tickets are free and you can register for the event here.

The winner of the division L final goes forward to the District Final in Southampton on May 6 & 7, 2017. The winner of the speech contest in the district final goes on to represent District 91 at the Toastmasters International World Championships in Vancouver, Canada August 23-27, 2017.

So please wish both Mike and Gill all the best for the area final and hopefully they’ll carry the HOD flag a lot further.

This site uses Akismet to reduce spam. Learn how your comment data is processed.